Profiles and found objects - many of the forms start out simply as cut-out shapes....others are fabricated from an existing object or 'found object'. 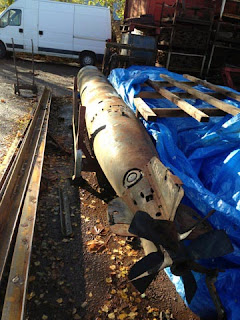 Planning permission granted beginning of September, so I have been working on the initial forms and moulds prior to the casting process.

﻿﻿
Posted by Andy Kirkby Sculpture Blog at 02:18 No comments: 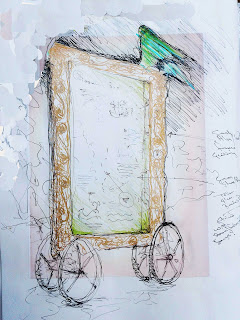 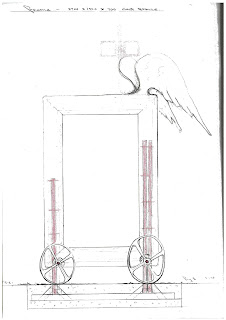 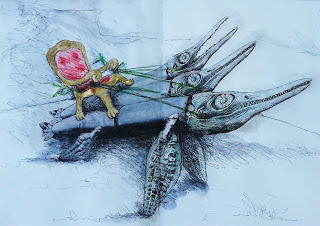 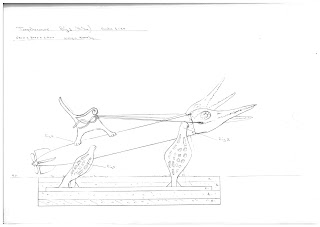 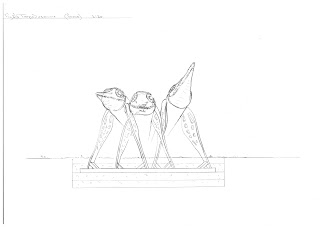 Posted by Andy Kirkby Sculpture Blog at 02:13 No comments: 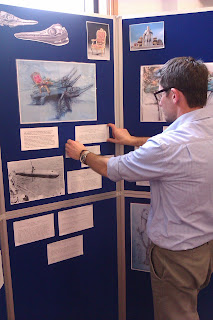 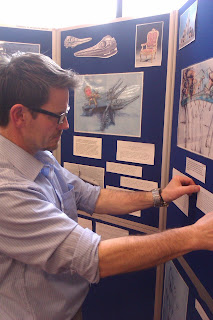 Posted by Andy Kirkby Sculpture Blog at 01:39 No comments:

My memories of Mount Pleasant Farm.
I was born in 1934 in Spa Road, Radipole, very near to Mount Pleasant Farm. In 1939 Mr Harry Garrett became the tenant farmer of this Farm (which was owned by Mr, Harry Weedon). Mr Garrett had two sons, called John and Bob and he was married to Annie (Mrs. Garrett). I met the Garrett brothers when I sang in the choir at St. Ann's Church, Radipole with my brother Michael, together with another five sets of brothers. We used to congregate at the farm in our spare time, where we would help bring bringing in the cows for milking and also help with the hay making. After school we would go to the Dairy and put the cardboard tops on the milk bottles. Summer holidays we would camp in the field called 17 acres (now Morrison's supermarket).

There were times when the bull had to service the cows and Mrs Garrett would make us go inside, but we used to watch from the windows!!! During harvest time, 2 carthorses, Duke and Admiral were brought to the farm from Tatton Farm, which was also owned by Harry Weedon, who was the nephew of Mrs. Rice who lived in the 'Big House' which was at the top of Ten Acres, near Two Mile Coppice. The carthorses were used to pull the wagons during the haymaking season. Most of the choir helped out during the summer months and Mrs. Garrett, who without fail was dressed in a full-length Pinafore, together with Wellington Boots, provided us with drinks and snacks.
Yes, the days spent at Mount Pleasant Farm were IDYLLIC.

Posted by Andy Kirkby Sculpture Blog at 05:57 No comments:

Many thanks to everyone who attended the second public meeting at The Old Spa pub last Tuesday. As mentioned we have no idea yet how many proposals will be implemented, here are the images of the initial concept drawings taken from my sketch book.

These concept ideas were derived from stories associated with George III, the old torpedo factory near Wyke, Jurassic Coast to name but a few! 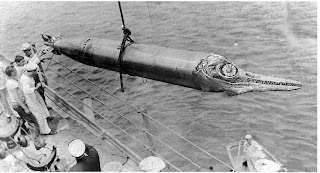 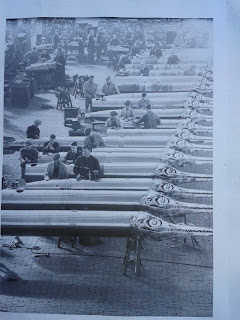 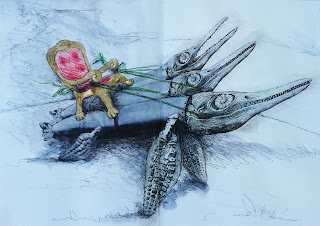 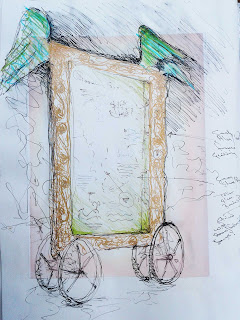 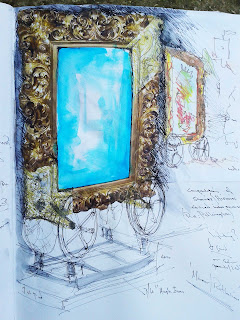 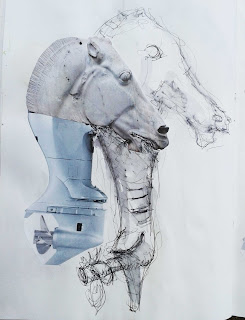 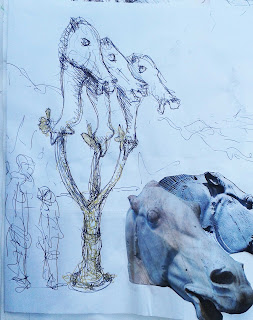 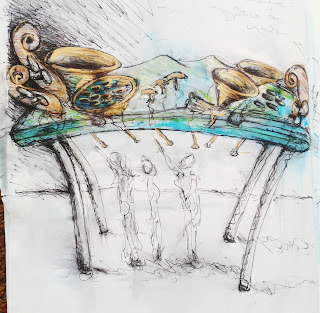 Posted by Andy Kirkby Sculpture Blog at 05:54 No comments:

Thanks to staff and pupils at Radipole School, Weymouth where I spent a day last week working with two classes of Year 6 pupils on ideas for the project. These included a story about a crazed spectral horse called 'Colepexy' http://www.darkdorset.co.uk/colepexy, wreckers, pirates and dolphins chasing torpedoes!

Hope to see some of you at the next public meeting on:

I will be presenting some of my initial designs and ideas and explaining how the stories from the community have contributed.
Posted by Andy Kirkby Sculpture Blog at 10:36 No comments:

Stories from this week

Many thanks to Wey Valley students who attended the workshop on Tuesday, lots of clay maquettes made and lots of good ideas. Please keep them coming...

Hello,
As a child I remember stories about Bincombe Hill. Fairy music could be heard from beneath the ground. There are also stories about a Weymouth sea monster called Viasta? Half fish, half seahorse . My Dad worked for Vickers, testing torpedoes in Weymouth bay, he told me he once saw a Dolphin chase a torpedo as it went through the water.
Best of luck


Hello Andy
As a lifetime Weymouth resident, I'd like to share with you some of my fond memories and stories about the town (though some come from my own Mother who passed away a few years back):


The Ritz Theatre once stood where the Pavilion is now. I remember the day it burned down. The word went round Westham and everyone rushed down to the beach to watch. There were hundreds gathered to watch this beautiful iconic, Victorian building go up in flames - because it was built from wood and they just could not get the blaze under control. There are photos on the walls in Sutton Coffee shop (St. Albans Street in town), taken on that day. Although only a child at the time, I remember it vividly.
The Ferries Train used to run along the quay. A section of the line (which is still there today as a reminder), peeled off next to the railway station and headed for the harbour. The old British Rail Trains which used it, went very slowly as people, bikes and cars milled around as normal - health and safety was a lesser consideration then! The priority was to get travellers to their Sealink Ferry on time, down at the embarkation point. A man with a flag walked in front of the trains - and a whistle I think - and often there would be a car parked in its was, meaning the train was stopped (holiday makers hanging out of the window to see what the delay was!), while the driver was found, usually in one of the pubs lining the train's route. It used to go so slowly along the quay that the pub drinkers would take on dares to run under the train from one side to the other, with their pint in hand if I recall!


Beach Bonfires used to be lit by anyone who wanted to haul the wood down to the beach to build a pile in readiness for Guy Fawkes Night. This was again before Health and Safety restricted the celebration to one big corporate one, fenced off from the masses. There could be 20 bonfires lit on the night, and each groups of kids or family with their own fireworks display. A sight to behold!
Bandstands used to punctuate Weymouth from the Pier Bandstand (blown up in the 80s and never replaced for the Millennium as promised!), in the middle of the beach, to the Jubilee Clock and right along the esplanade to the Alexandra Gardens. Each of the 3 bandstands had big bands playing regularly just before WWII and my Mother used to stroll in her finery between each of these on a summer's evening, dancing to the big bands which played in each. She told me of the packed dance floors and the atmosphere and that when the band took a break, they would play the latest Glen Miller records from America, to which people would continue dancing. There was also a bandstand in the Nothe Gardens, overlooking the harbour, which I remember being taken to as a girl for a picnic. Here though, there were brass rather than big bands, playing up until the 1950s. Dancing and rollerskating were popular pastimes for all, throughout the middle of the last century and venues included the Pavilion and the Sydney Hall (where the Asda store now stands).


Brummy Fortnight was when all the factories in Birmingham shut for the same two weeks and all the workers and their families got the train to Weymouth for their holidays. I remember the trains arriving at the old station (another timber building), packed with these visitors, with their luggage loaded onto carts, headed for their regular sea front hotel. For the next two weeks the Brummy accent was everywhere in the town!
Alexandra Gardens Theatre, I remember being taken to as a child and seeing Bruce Forsyth! A lot of big names used to do shows and Gilbert and Sullivan Operas played there. There's nothing like that now. I believe that burnt down too.

I hope these are of interest and perhaps of use to you in your project. I look forward to seeing the outcome!


Hello
I would like to suggest some sort of reference to George III and his early bathing exploits. After all, he was responsible for introducing this leisure activity to the area. The long presence of Naval activity within the bay is also of great import (Spanish armada, naval harbour and underwater weapons base on Portland).

Stories beginning to come in following public launch at The Spa

1. 'My Grandad used to get the bus into Weymouth from here and said that he took his dog Shoka onto the bus with him one day. The driver asked if Shoka was his dog and when Grandad said yes, he said, 'That dog's been getting on my bus every day alone, to go down to the beach!'.'

2. 'As Weymouth has always been a busy port, what about treating it as a 'nautical' gateway with a two-way directional element to the sculpture to mark the comings and goings? After all, the ferries have always meant you would come to Weymouth to go to France and the Channel Islands. A number of the Pilgrim Fathers' ships left from Weymouth in the carrying Dorchester families and it was through Weymouth that the plague (or 'black death') was introduced. Something nautical and relating to the Olympics sailing events of last summer. The black death coming into Weymouth! Maritime theme: Ferries, Pilgrim fathers, Spanish Armada, wreckers, plague, smuggling, fishing

3. 'I remember the farm that was on the site when I was a boy. It had a big white, five-bar gate into the farm with a sign on the gate and on the sign was written one word; 'Eureka' which translates as 'I've found it!'. It was a lovely place. Rocky Knapp – opposite the turn off to Morrisons, was where the cows were milked and I can remember the farmer stopping the traffic on Dorchester Road, when he drove his cows across from the fields.

4. 'We used to play in 'Two Mile Coppice' – it was like a playground for children and the bird life was wonderful!' 2 Mile Coppice is an ancient woodland.

5. Something around fashion and New Look's operations in the area. Something about the story of New Look from market stall to multinational company.

7. Boot – with wild life under it. “Grand Old Duke of York” nursery rhyme about marching troops up Bincombe Bumps then wildlife under that has reduced in numbers.

9. Something evoking the memory of the Roman Dorchester Road – now partially replace by the new relief road.

10. The intersection of the transport links (roads, railway lines, cycle paths and footpaths) at the site

11. Fossils and the Jurassic Coast

Posted by Andy Kirkby Sculpture Blog at 06:07 No comments:

Many thanks to everyone who came along to the launch at The Spa pub.  Looking forward to collecting some of your stories/histories on this blog.

I will need these soon, as I only have about 3 weeks to feed these ideas into the designs for the art work, so please spread the word and get blogging!

Thanks
Posted by Andy Kirkby Sculpture Blog at 10:36 No comments:

Weymouth Gateway Public Art Project - how you can get involved 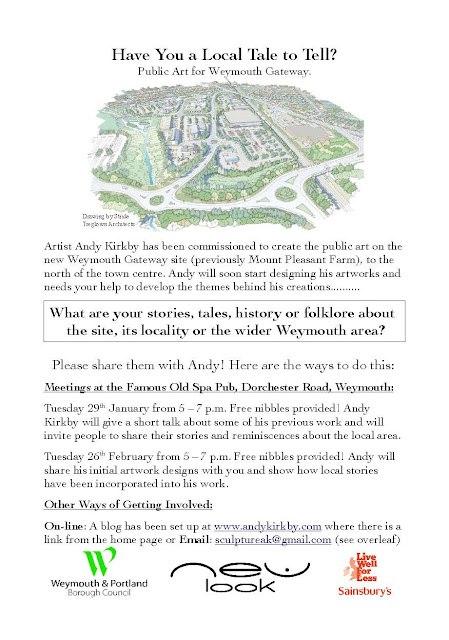 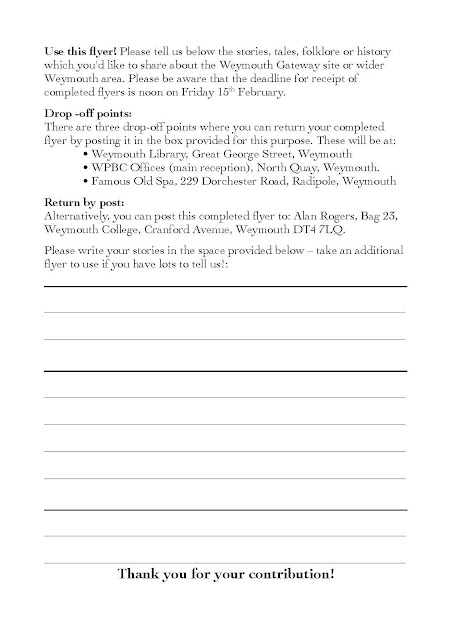 Posted by Andy Kirkby Sculpture Blog at 03:53 No comments: 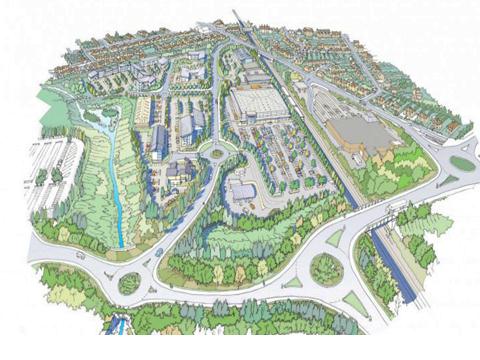 Posted by Andy Kirkby Sculpture Blog at 04:23 No comments: